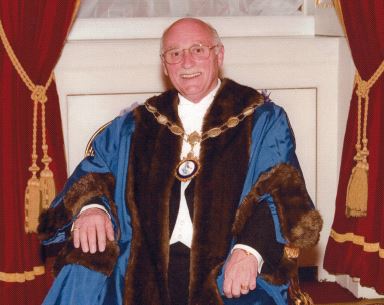 Some highlights from my year:

My installation at the Mansion House was held on 1 April 2005, which could be considered as being April Fools’ Day, but it certainly was not.

It was a great occasion with the Lord Mayor Sir Michael in attendance. The Lord Mayor was due to attend a memorial ceremony in Norfolk the next morning and it was possible that he and his party would have to leave early. He did me the great honour of staying right to the end of the evening. However the final highlight was the sight of the Lady Mayoress, dressed in jeans and rugby shirt, running through the Mansion House, jumping into a waiting Range Rover and speeding of in the direction of Norfolk.

An incident worthy of note happened when I was Junior Warden. We had contributed towards a stained glass window in Guildhall Library and were invited to the official opening being carried out by Prince Philip. Following the opening ceremony, Prince Philip walked down the stairs to where we were standing. On passing he stopped and said to me, “What do you do?”, industrial cleaning was my reply. “If that’s the case, why don’t you do something about getting rid of all the graffiti from the walls of the train lines coming into the city?” he said and promptly walked off.

I stood mouth open, just realising I had had a royal telling off.

Each Master likes to leave a legacy of his year and I was fortunate to been able to instigate a couple of items, which have remained with us.

The military awards were held at the home barracks of the RAMC in Aldershot and we were given a great day out which included a demonstration of how they made urgent latrines for the troops arriving in Iraq; much to the amusement of our lady guests. I also had the honour of laying a wreath at the RAMC memorial, which is located next to their museum.

During the Master’s year, you are invited to many functions, which are too numerous to mention, but the highlight was possibly the invitation to attend the Queen’s garden party at Buckingham Palace.

One of the fun events was when we entered a team to run in the Pancake race held in the Guildhall yard. We did our best to run as fast as possible whilst tossing the pancake but unfortunately were beaten by a team from the Crop of London who had entered a couple of ringers. A great fun day was had and certainly put our name to the fore in the city.

In February we were invited to attend the Lord Mayor’s banquet held at the Mansion House.  The Lord Mayor, who had taken office in November, was David Brewer. He became Sir David at the end of his mayoral year and went on to achieve many positions in the city. Sir David has always been a friend of our company and did in fact attend the installation of my senior warden, Steve Wright at the Mansion House. Having progressed through many Levels in the city he was made a Knight Companion of the Order of the Garter. This award is the highest in the land and is only given at Her Majesty’s pleasure.

“I stood mouth open, just realising I had had a royal telling off”