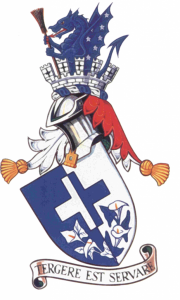 The armorial bearings of the Company comprise a shield, helmet and crest, blazoned with the motto ‘Tergere est Servare’ (To clean is to preserve).

The shield is a simple design and is exactly the same as the insignia and motto adopted by the Guild.

The tincture of Azure and Argent (Blue and Silver), as well as the madonna lilies and above all the cross, have long been accepted as symbolic of cleanliness, purity and sacrifice – all being admirable aims for those connected with keeping the environment clean. These tinctures and charges have been arranged in an armorial manner using the age-old device of counter changing (white on blue and blue on white) in order to achieve a bold heraldic design.

The crest, which is the device above the shield, is always depicted in Letters Patent of Armorial Bearings surmounted upon a helm having lambrequin (a scarf worn over a helmet) issuing from the top of the helmet.

The crest retains the basic tinctures of blue and white. The turreted tower represents a city, and the dragon rising from it represents the City of London.

The besom brush held by the dragon obviously indicates cleaning and the stars on its wings represent shining brightness.