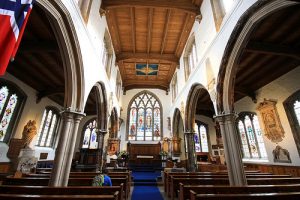 The Environmental Cleaners is linked to the Parish Church of St. Olave, Hart Street and it holds records of members’ marriages and their children’s baptisms as well as memorial services and the Company’s annual Rededication Service.

The church is dedicated in honour of Norway’s Patron Saint, Olaf or Olav, who was both King and Martyr. The name is spelt Olave in England. King Haakon of Norway worshipped here during the Second World War.

The first mention of the church in a document goes back to 1109 but it is likely that a church was built on the present site in 1080. Today’s church was built about 1661 and restored in 1951 following extensive damage in 1941.

Today the church is active with Sunday services and weekday musical recitals and with many special services; including annual services for the Clothworkers’ Company, Trinity House and the Environmental Cleaners.

The Environmental Cleaners are maintaining the ancient livery company tradition by being associated with a City church and our members feel especially fortunate to have St. Olave’s as our Chaplaincy Church. Our Honorary Chaplain is the Rector.

Martha was the sister of Lazarus and Mary and she received Christ into her house at Bethany. She complained to Christ that her sister Mary did not help sufficiently in preparing the house for his visit. She was present when her brother Lazarus was raised from the dead.

The feast day of Saint Martha is the same as that of St Olave, the Patron Saint of our Chaplaincy Church, 29 July.