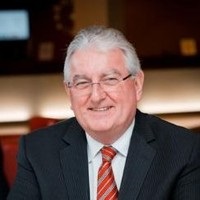 Barrie spent his early years in Berkshire before entering the contract cleaning and support service sector straight from secondary education.
Having learnt the trade from the ground up working for a number of established contractors in the UK and the Middle East Regions Barrie and his wife Carol started their own company in 1981 and went onto to build one of the largest support services companies in the aviation sector.
Following the acquisition of the business by a major European company in 2007 and a spell of early retirement he returned to the sector as an advisor to service providers in the International aviation sector overseeing projects in India, Singapore, Australia, New Zealand and Mauritius as well as mentoring and investing in UK start-up businesses.
A Liveryman since 1994 Barrie progressed through the company before taking his first spell as Master in 2010. As true environmentalists the Environmental Cleaners are recycling old Masters so Barrie will be serving as his second spell as Master from April 2019.
Barrie and Carol have lived in North Hampshire for over 30 years and when not working Barrie is heavily involved in rugby 7s. Together we enjoy travel, theatre, food and wine and our grandchildren.